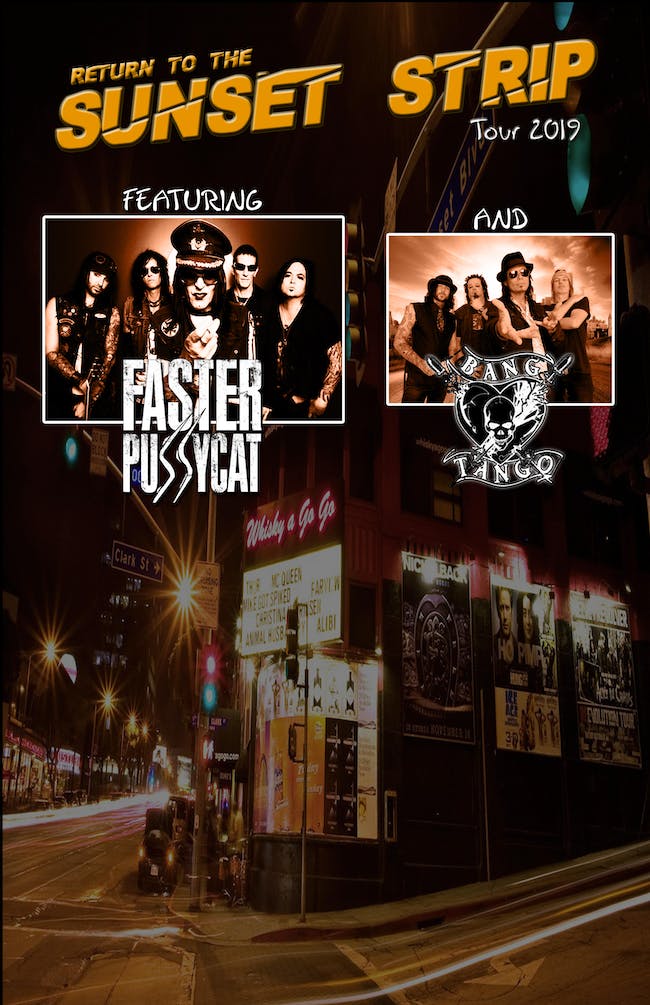 Return to the Sunset Strip Tour

No band epitomizes Hollywood sleaze more than Faster Pussycat. Countless bands have adopted their look and demeanor in order to try and ride the Hollywood wave to success. Most fail. For those bands it’s a costume…an act. For Faster Pussycat it’s a way of life. They said it best in their own song “Sex, drugs & Rockn-Roll” off their 2006 album “The Power and the Glory Hole”. However don’t be mistaken, they are much more than an image. First and foremost they are a rock n roll band that has put out consistently great records and given it all on stage, where it counts the most.

Singer Taime Downe formed the band in 1985, taking its name from the cult classic Russ Meyer film Faster Pussycat! Kill! Kill! In 1987 they released their selftitled debut album which went gold. The album was loaded with sexual innuendo and bravado and struck a nerve in the glam rock community, though they were always a little more down and dirty than glam. During that time they were interviewed and played two songs (Cathouse and Bathroom Wall) in the documentary film “The Decline of Western Civilization Part II: The Metal Years. The documentary captured the general vibe of the Sunset Strip bands during that time period, with Faster Pussycat being featured front and center.

In 1989 they released the album “Wake me when it’s over”, which spawned the massive top 25 hit single “House of Pain” propelling them beyond the sunset strip to worldwide acclaim. They received substantial airtime on MTV for the video and toured with some of the biggest bands in history: Guns n Roses, Motorhead, Motley Crue, Kiss, Alice Cooper and many more. They were able to reach fans all across the world and the sunset strip seemed endless as fans clamored for a taste of the famed Faster Pussycat sleaze. The album went gold and to this day many hail “House of Pain” as one of the greatest power ballads of all time. The band’s line-up during this time was Taime Downe (vocals), Greg Steele (guitar), Brent Muscat (guitar), Kelly Nickels (bass) and Mark Michaels (drums).

In 1992 the band released the album Whipped and toured in support of it. Following the tour the band broke up, with each member heading in separate musical directions.

Taime Downe decided to go in a more industrial rock direction working with the band Pigface before forming the band the Newlydeads. The Newlydeads put out three albums. Their self-titled debut, a remix album titled “Re-bound” and “Dead End”.

In 2001 Taime Downe decided it was time to get Faster Pussycat back together to give the world another dose of the Hollywood Sleaze that had all but disappeared during the grunge era. Muscat and Steele rejoined the band along with The Newlydeads Xristian Simon, Danny Nordahl and Chad Stewart.

Faster Pussycat quickly put out a collection of industrial remixes of the band’s early songs produced by Downe and played to enthusiastic crowds around the world. During this time Muscat and Steele left again.

2006 saw the band’s first full-length release in 14 years, “The Power & The Glory Hole” and proved that under Taime’s leadership the band was in good hands. 2009 saw the release of a live album “Front Row for the Donkey Show”. Both were put out by Full Effect and the reviews were positive.

In 2010 guitarist Ace Von Johnson joined Faster Pussycat cementing the current line-up. The interjection of fresh blood into the band was immediately noticeable as his youthful high energy and virtuoso performance rejuvenated the band and their live performances. It was like 1987 again.

Faster Pussycat is currently working on a new EP and doing what they’ve always done, touring heavily, rocking the fuck out of every venue they play and keeping the spirit of Hollywood Sleaze alive and well 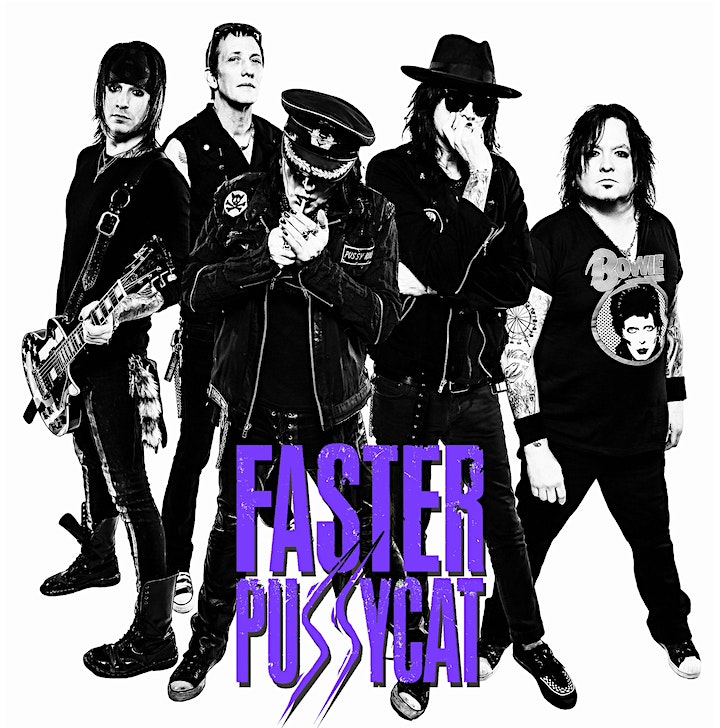 Although Bang Tango was often lumped in with the whole 80's glam metal movement (perhaps due to their pretty-boy looks and the fact that they hailed from Los Angeles), the hard-rockin' quintet was one a few L.A. glam groups to incorporate funk into its sound - around the same time as the Red Hot Chili Peppers and Faith No More made it acceptable to do so. Their line up consisted of Joe Leste' (Vocals), Kyle Stevens (Guitar), Mark Knight (Guitar), Kyle Kyle (Bass), and Tigg Ketler (Drums), and piqued the interest of Mechanic/MCA shortly after the quintet issued their first in-concert recordings, 1987's "Live Injection". Their major-label debut, Psycho Cafe, was issued in 1989. MTV's Headbangers Ball gave significant air time to their single "Someone Like You", and eventually it became a mainstay on the dial MTV charts. The group continued to issue albums throughout the early 1990's including "Dancin' On Coals", "Ain't No Jive...Live!" and the critically acclaimed "Love After Death". In 2000, Leste' formed a more modern-sounding alt-metal outfit, Beautiful Creatures, issuing a self-titled debut the same year on Warner Brothers. Beautiful Creatures toured as part of the 2001 Ozzfest as well as supporting KISS on a number of dates. Bang Tango has since produced three studio albums this decade. "Ready To Go" (2004), "From The Hip" (2006), and the latest release “Pistol Whipped in the Bible Belt” (2011).

2014 brings the band’s 25th anniversary with the addition of former DIO guitarist Rowan Robertson. In 1989 Rowan was recruited by Ronnie James Dio to join the band DIO when he was only 17 years old. The experience launched the young guitarist from obscurity to international fame nearly overnight.

“Robertson has brought a renewed sense of excitement and focus to the group” says lead singer Joe Leste'. Bang Tango is currently writing with Rowan for a 2015 release. 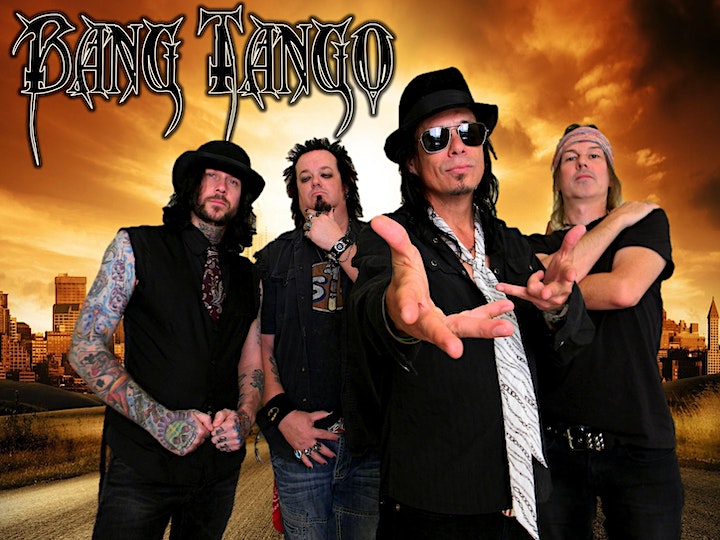 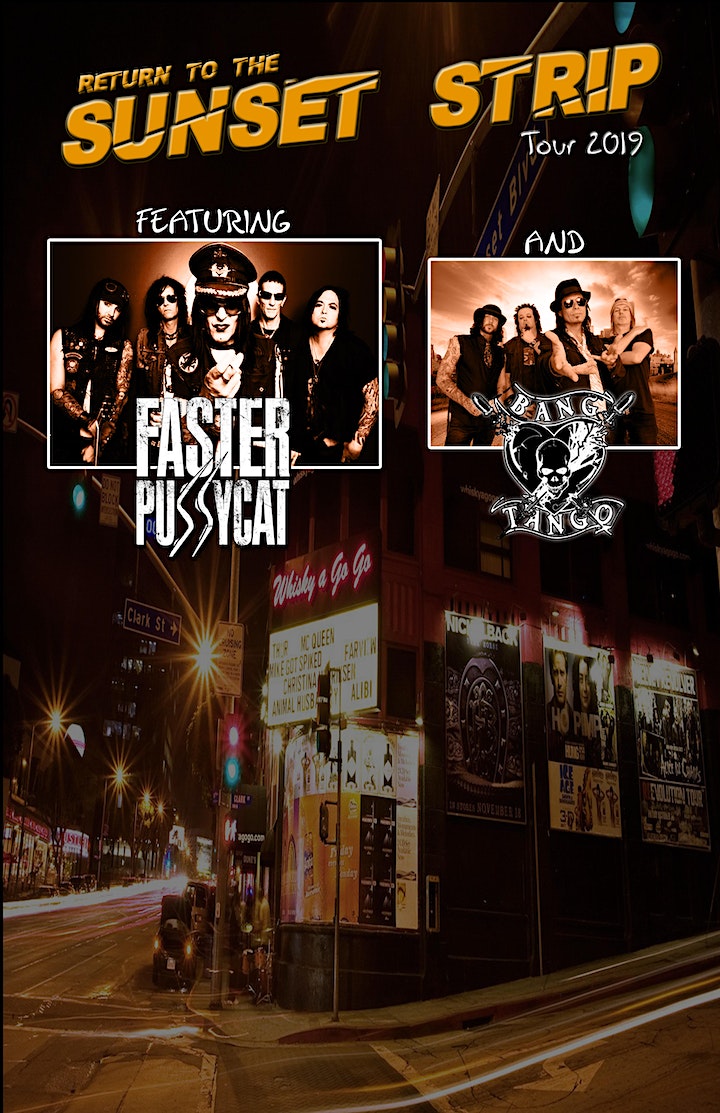