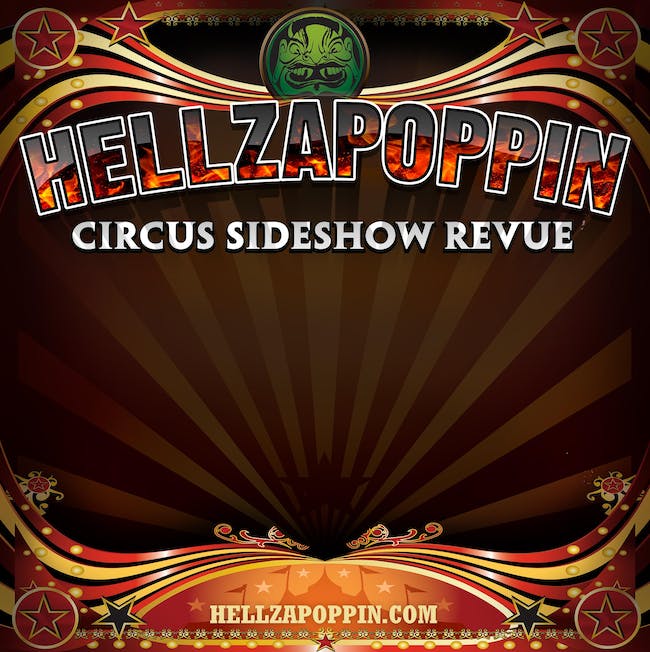 This vaudeville freak show of wonder is brought to you by Hellzapoppin's Founder, Ringleader, Producer, Director and Sideshow Stunt-Man, Mr. Bryce "the Govna" Graves. Brothers and sisters, you are about to meet a cavalcade of human curiosities the likes of which the world has never seen before and may never see again. The Govna will be your shepherd and your guide on a journey of miraculous discovery through the world of the strange, the weird, bizarre, odd and the unusual.

We're mavericks, trail blazers, rebels, rule breakers, outlaws...true uninhibited artists. We deliver our message through sideshow and fuel our art through passion. Named after the most successful Broadway musical and movie from the late 30's and 40's, Hellzapoppin is a world renown theatrical circus thrill-show where some of the deadliest stunts in live entertainment are performed to loud crowd-pleasing musical tracks.

You might have seen Hellzapoppin's feature performer The LIZARD MAN's life-sized wax figure featured inside Ripley's Believe It Or Not museums all over the world. The Lizard Man is a self-made FREAK tattooed from head to toe with green scales complete with a split tongue and implanted horns on his head and arms. He's holds multiple Guinness World Records, he's appeared on TV shows all over the world and is known for his amazing sword swallowing skills!

You'll witness with your own eyes the world's most amazing half-man Short E. Dangerously (aka Shorty). That's right, he's a half man cut in half at the waist and walks bare-handed on broken shards of glass while on fire. Shorty is featured in a 2-page spread inside the 2017 Ripley's Believe It Or Not book, Shatter Your Senses! Ripley's also has a wax figure of Shorty in Ripley's Believe It Or Not Museums all over the world and was featured on Ripley's brand-new international TV show. Shorty has traveled the world over many times performing at the world's largest festivals and very best music venues, theaters and has been featured on countless TV shows. You'll see the world renown Crossbow artist Mr. Ben Blaque. He and his lovely assistant (Ms. Willow Lauren) performs death defying stunts live on stage. Ben Blaque established himself as the world's foremost master of the crossbow after appearing multiple times on America's Got Talent and Britain's Got Talent. His 'Danger Act' was one of the 'Judges' Favorites', which propelled him into the quarterfinals and he returned at the request of Howard Stern for the "Wild Card Show". He has not only performed on international TV, including the NBC show "I Can Do That" and Argentina's "Susana Gimenez", but also with the best-selling magic show in Broadway history, The Illusionists, appearing as "The Weapon Master" touring across America, Australia, Europe & South America.ast but not least, you're going to see the beautiful talented sideshow starlet, Ms. Willow Lauren. Willow is a former motorcycle stunt-rider turned international touring illusionist sideshow stunt-woman. Willow performs the contortion bladebox of death, she not only eats fire, she eats and regurgitates razor blades and she'll even pull a lifesaver down her throat and out her neck before your very eyes!